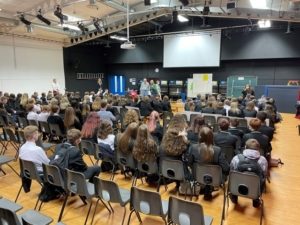 The latest Neighbourhood Plan consultation took place up at the Dartmouth Academy during the first week back of the new school term. 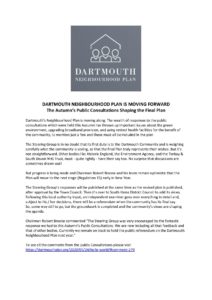 Dartmouth’s Neighbourhood Plan is moving along. The wealth of responses to the public consultations which were held this Autumn has thrown up important issues about the green environment, upgrading broadband provision, and using retired health facilities for the benefit of the community, to mention just a few and these must all be included in the plan

The Steering Group is in no doubt that its first duty is to the Dartmouth Community and is weighing carefully what the community is saying, so that the final Plan truly represents their wishes. But it’s not straightforward. Other bodies like Historic England, the Environment Agency, and the Torbay & South Devon NHS Trust, must – quite rightly – have their say too. No surprise that discussions are sometimes drawn out!

But progress is being made and Chairman Robert Brooke and his team remain optimistic that the Plan will move to the next stage (Regulation 15) early in New Year.

The Steering Group’s responses will be published at the same time as the revised plan is published, after approval by the Town Council. Then it’s over to South Hams District Council to add its views. Following this local authority input, an independent examiner goes over everything in detail and, subject to his / her decisions, there will be a referendum when the community has its final say.

So, some way still to go, but the groundwork is completed and the community’s views are shaping the agenda.

Chairman Robert Brooke commented “The Steering Group was very encouraged by the fantastic response we had to this Autumn’s Public Consultations. We are now including all that feedback and that of other bodies. Currently we remain on track to hold the public referendum on the Dartmouth Neighbouhood Plan next year.”

To see all the comments from the public Consultations please visit https://dartmouthplan.org/2020/09/24/hello-world/#comment-279

WE NEED YOU – COUNCILLOR VACANCIES
Scroll to top

Because these cookies are strictly necessary to deliver the website, refuseing them will have impact how our site functions. You always can block or delete cookies by changing your browser settings and force blocking all cookies on this website. But this will always prompt you to accept/refuse cookies when revisiting our site.