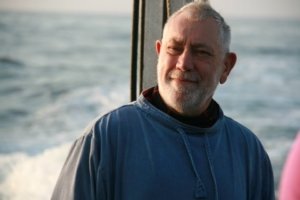 Looking out to sea from the Castle.

Difficult question, there are so many. Recently I have been prompted to read “To kill a mocking bird” by Harper Lee which I found to be most profound and thought provoking. More so than the sequel “To set a watchman” which appears to conflict.

ADVICE YOU WOULD GIVE YOUR 18-YEAR-OLD SELF?

Never work for your Father!

HOW DID YOU END UP IN DARTMOUTH?

Took voluntary redundancy from British Coal, moved from Nottingham and with my family followed our passion of SCUBA diving by owning and operating a diving charter vessel from Dartmouth.

ANY CUTE KIDS OR PAMPERED PETS?

Two adult children. One an Engineering Director, the other a Post-Doctoral Researcher in Marine Biology. Both have turned out to be well rounded and successful human beings despite my worst efforts.

Persuading Penny to marry me!

Being towed back into port by the Torbay Lifeboat after seizing the boat’s engine.

EAT-IN OR DINE OUT?

Eat in with occasional eat out. Prefer pub grub!

BEST THING ABOUT LIVING IN DARTMOUTH?

Just feel completely at home like nowhere else we have lived.

WHAT ANNOYS YOU MOST?

People who take the view that anyone who disagrees with them are evil.

WHAT MAKES YOU HAPPY?

The combination of tranquillity mixed with excitement from being 70 metres down exploring a shipwreck or the thrill and sense of freedom from riding one of my motorbikes.