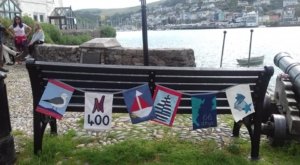 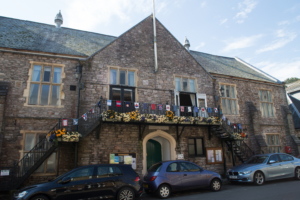 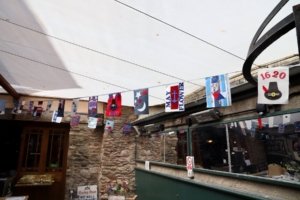 Thousands of Pennants are decorating the historic town of Dartmouth, in a unique stitchery
project where people from around the world have contributed crafty creations linked to the
Mayflower story. The Mayflower and the Speedwell famously made their last stop in
Dartmouth before heading to the New World, only to have to return to Plymouth before their
final sailing from Plymouth on September 16, 1620 leaving the Speedwell behind.

5315 hand-made Pennants, made by 152 people are being hung around Dartmouth as part
of the commemoration of the sailing of the Mayflower – a blaze of colourful bunting that is
transforming the town. The pennants are strung together on binding supplied by Michael
Madigan of Appeal Blinds.

Project Lead, Marilyn Bird said “What started over coffee with Rose Williams of the Stitchery
Group as an exciting idea to involve the Dartmouth community has now become a
international explosion of Pennant making magnificence which now adorns our town with
imagination and colour…”

The idea was the brainchild of Rose Williams who leads an enthusiast team of around 200
with a core of six volunteers at the heart of the operation, Dartmouth Stitchery Group. The
Pennants all follow three basic rules – to keep the colours of predominately red, white and
blue, link the design to the Mayflower and keep the Pennant to an A4 sized template. The
whole team includes makers, hangers and a pinning-on team who all battled 2,250 metres of
hanging tape and 50,000 metres of thread. The project was launched with finance from Cllr
Jonathon Hawkin’s Community fund.

Many of the fabrics used were repurposed and include tea towels, tablecloths, shirts, and
even the handkerchiefs of the late husband of one member of the core team. The first
Pennant was made in February 2018, so the display is the result of hours of work over two
and a half years.

Alongside our local team. Pennants have also been donated from far and wide; people
responded to the Mayflower story by sending Pennants from the USA, New Zealand, Japan,
Ireland, Europe, Eire, Africa and Australia, as well as throughout the UK. In May 2019 a
group of Mayflower descendants from the US visited Dartmouth and presented 6 beautiful
Pennants to hang alongside our collection.

Rose said: “Our original target was 4000 Pennants, but the display is now even more
spectacular than we could have dreamed. Makers aged from 92 years to our youngest, a
ten-year-old girl from Melbourne in Australia called Annabel who heard about the project
whilst on holiday here in Dartmouth and then joined in with one of our workshops. The
support we’ve had from the community, around 65 local businesses and organisations,
including The Flavel Arts Centre, the Royal Castle Hotel, and Alf Resco who kindly donated
their facilities and our Town and District Councils, has been wonderful.”

“One unforeseen aspect of the project is the way we have now made friends with strangers
around the world through crafting. At a Craft Exhibition in Exeter, we met a Mayflower
Descendant and were able to show her a Pennant made by another American descendant of
the very same Pilgrim.”

The Pennants will hang in Dartmouth until 7th September 2020.

After their tours of Dartmouth, many of the Pennants will be available for purchase, with
proceeds going to Rowcroft Hospice in Torquay. Some of the Pennants will also remain in
Dartmouth on permanent display showcasing the wonderful efforts of the crafting
community as part of lasting legacy for the town.

For more information about Dartmouth Mayflower 400 and the pennants, please follow this link.