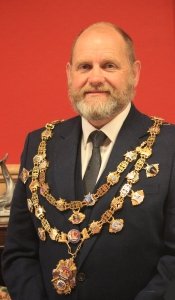 Our new Mayor Graham Webb has been interviewed by The Politics Show which will be shown on BBC 1, on Sunday 23rd of June at 11.00am.

Graham was interviewed as part of a wider West Country feature on the rise of Independent Councils. He discussed his Dartmouth roots, his hopes and priorities for the town and his personal reasons for getting involved in local politics.

The programme will also be available on BBC IPlayer for the next month.