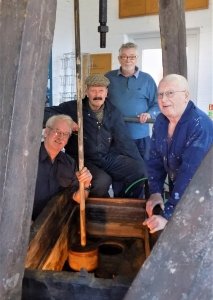 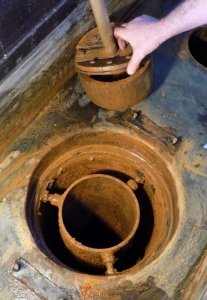 Last Saturday, under the guidance of Geoff Wallis CEng, MIMechE, Past President of the Newcomen Society, volunteers carried out essential maintenance to the Newcomen Engine which is housed in the building of the Dartmouth Visitor Centre.

The Dartmouth Newcomen Engine is the oldest preserved working steam engine in the world and was built in around 1720. It was first used to pump out the Griff Colliery in Staffordshire.

Dartmouth-born engineer Thomas Newcomen (1664-1729) designed and installed the first practical and successful steam engine, used initially for pumping water out of coal mines. More than 2,000 Newcomen Engines were installed world-wide during the 18th and 19th centuries, more than 600 of them before 1775 when James Watt was able to improve their efficiency.

The Dartmouth engine shows most of the features of the earliest Newcomen engines. It has a simple, untrussed, wooden beam with arch heads, chain connections and wooden spring beams all believed to be original. The valve mechanism is more recent, but is activated automatically by a plug-rod, as in the early engines. However, there is one significant later feature in the shape of a ‘pickle-pot’ condenser, fitted directly beneath the cylinder. The engine can be operated by a hydraulic mechanism, so that the visitor can observe the motion of the engine and the operation of the valves.