The Ancient and Honourable Guild of Town Criers National Competition took place on 4th August 2018 at Castle Hill, Windsor on the lawn of the outer moat, next to Salisbury Tower. 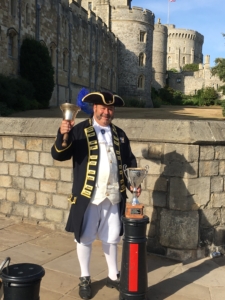 Gracious permission was granted by her Majesty for the event to take place and this was the first time in living memory that an event was staged at this location.

The competition is an annual event held in a different town each year.

38 criers took part from all over the country and included two criers from Australia.(Victor Harbor and Lane Cove, Sydney)

The ‘cry’ in the morning was a home cry and the subject for the ‘cry’ in the afternoon was ‘A Celebration’. Criers have to write their own cries of no more than 125 words including the opening words ‘Oyez, Oyez, Oyez’ and finishing with ‘God saveThe Queen’.

The winner of the competition was Christian Ashdown from Haselmere, Hampshire,

The winner for Best Dressed Crier was Les Ellis-Dartmouth.

The Best Dressed Consort was Lillian Heeks from Trowbridge, Wiltshire and

The Best Dressed Couple were Peter and Joan Dauncey from Melksham. 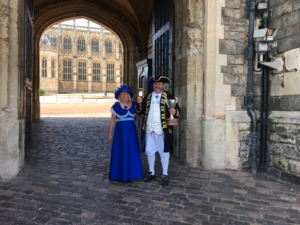 I was wearing my new regalia made by local seamstress Sophie Tope.

Want to join the discussion?
Feel free to contribute!

Come and have your say about BYELAWS
Scroll to top